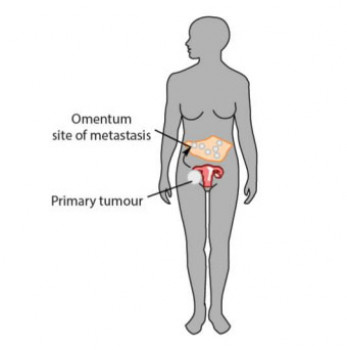 Cancer patient survival for varied tumour types has doubled in the past few decades. This is thanks to improvements in prevention, detection and treatment modalities. In general, 90% of cancer deaths that do still occur worldwide are as a result of 'metastasis': spread of the cancer to distant places in the body. This is because metastatic malignant cells develop resistance to therapy and tactics to evade the body immune response. One type of ovarian cancer, high-grade serous ovarian cancer (HGSOC) has an especially poor five-year survival rate and is one of the most lethal gynaecological cancers. The majority of patients with HGSOC are diagnosed at an advanced stage and more than 80% of them experience metastases.

Resistance of malignant cells to cancer treatment often stems from the tumour microenvironment (TME) that surrounds them. The TME is composed of non-cellular components (matrix) malignant cells, blood vessels and non-malignant cells, including stromal cells and immune cells, the latter comprising up to 50% of tumour mass in some solid cancers. In recent years, clinical and basic research has focused extensively on understanding the complexity and diversity of the immune cell component of the TME, since it correlates with patient prognosis and response to therapy. Macrophages, a type of white blood cells, are among the main immune cell components of the TME. Tumour associated macrophages (TAMs) promote all stages of tumour progression (including invasion and metastasis) as well as resistance to treatment in a number of solid cancers. Limited understanding of the different functions of TAM and cellular interplay between TAMs and malignant cells impedes advances in emerging therapies, such as immunotherapy and targeted therapy. The past two decades have marked a surge in developments of in vitro models to reconstruct the complexity of TME giving a way to investigate the crucial interactions between malignant cells and surrounding TME. Most of human TME multi-cellular models do not incorporate immune cells.

Our vision with this proof-of-concept (POC) funding support is to build a model of HGSOC metastases that replicates many aspects of the TME. Our group has successfully developed a preliminary HGSOC multi-cellular model that recapitulates some of the aspects of tumour associated metastatic HGSOC tissue. Building HGSOC with chips from this POC will enable us to increase complexity of the in vitro model and to approximate its fidelity to in vivo TME components, by introducing blood vessels. We will introduce macrophages to the system and investigate how they affect malignant cell invasion and also how malignant cells affect the functional and activation state of TAMs. To account for cellular heterogeneity of TME we will use advanced stem cell techniques to generate macrophages from induced pluripotent stem cells. The model developed in this project will enable a focused study of malignant cell-TAMs interplay and provide a more robust recapitulation of TME to aid in advancing the field of immunotherapy.