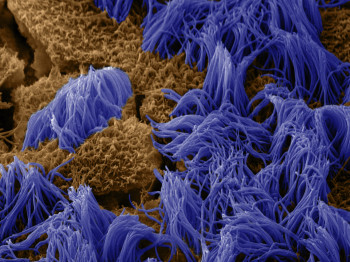 We will produce the first bovine lung-on-a-chip model, recreating key aspects of the airways by incorporating lung (epithelial) and blood vessel (endothelial) cells in upper (epithelial) and lower (endothelial) channels. We shall characterise the model by detecting proteins which occur specifically in epithelial and endothelial cells, using fluorescent antibodies that bind to those proteins. We shall also see how tightly the cells are bound together by measuring how quickly a coloured compound (dextran blue) travels between the cells. The slower the rate of movement of the compound from the upper to lower channel, the more tightly the cells are bound together, an indicator of strong integrity of the cell layer as would be encountered in normal lung. The model will then be used to study the transport of two antibiotics used to treat the bacteria responsible for causing bovine respiratory disease (BRD), one of the most economically important respiratory diseases of calves in Europe and the United States. We shall measure the rate of drug transport from the lower to the upper channel (mimicking the transport of the antibiotic from the blood to the air-side of the lung where the disease-causing bacteria reside). These data will be compared by our collaborators at North Carolina State University with their results from using these drugs in cows affected with BRD.